In this volume is edited the poetry which was added to the ‘third stratum’ of the Hendregadredd Manuscript, when that manuscript was in all probability the ‘court book’ of Ieuan Llwyd of Glyn Aeron in Ceredigion in the second quarter of the fourteenth century. A number of the poems are addressed to members of Ieuan Llwyd’s family and friends, such as Sir Rhys ap Gruffudd, the probable patron of Einion Offeiriad’s Grammar, and Tomas ap Rhotbert, who was bedellus in Ceredigion. Also edited in this volume for the first time is Dafydd ap Gwilym’s long series of englynion to a rood in Carmarthen; although Thomas Parry initially believed that these were not the authentic work of Dafydd ap Gwilym, he later changed his mind. Two poems attributed to Llywelyn Ddu ab y Pastard are also included: the first being a traditional elegy to the family of Trefynor, not far from Ieuan Llwyd’s home in Glyn Aeron, and the second being a long and vituperous satire addressed to eight unfortunate individuals. 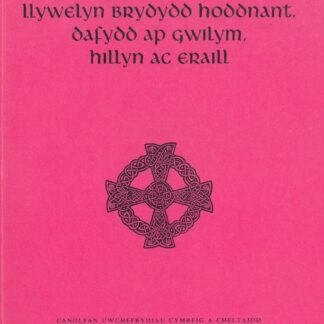