This is the last of three volumes of the work of Gruffudd ap Maredudd ap Dafydd, the Gogynfardd from Anglesey who flourished in the second half of the fourteenth century. It contains a variety of poems reflecting the broad range of subjects that inspired a poet such as Gruffudd. There is a highly nationalistic ode to Owain Lawgoch, a direct descendant of the Gwynedd royal dynasty, encouraging him to return from France to repossess Wales. This poem is a striking contrast to the later elegy to Sir Hywel y Fwyall, the former constable of Cricieth castle, who was honoured for his service to the King of England in the battle of Poitiers. There are three poems dedicated to women: two series of love englynion to the aristocratic girls of Anglesey, and the third a powerful elegiac ode to Gwenhwyfar of Pentraeth, claimed to be one of the greatest poems of the fourteenth century. His four surviving satirical poems are cruel, and contain descriptions of bodily pestilence, of a woman with very loose morals, and of the contorted body of a thief hanging on a gibbet. A full glossary to all of Gruffudd’s work is provided at the end of the volume. 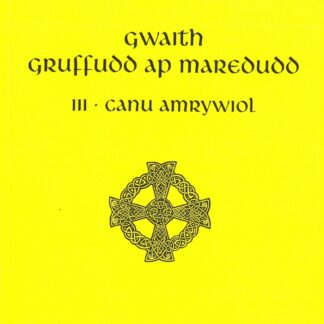