View basket “Gwaith Gruffudd Gryg” has been added to your basket.

Gruffudd Gryg was an exponent of the cywydd metre, and he flourished at the same time as his friend and adversary Dafydd ap Gwilym, namely in the mid-fourteenth century. The co-editors both strongly believe that Gruffudd Gryg deserves recognition, not as the stooge of his better known contemporary with whom he debated in their celebrated bardic contest, but as an innovative, witty and versatile poet in his own right. Some of the most extraordinary cywyddau ever written are to be found within this volume, such as the poems Gruffudd wrote to the moon and the wave whilst on a pilgrimage to Santiago de Compostela in Spain, the oldest surviving cywydd of reconciliation and the first known example of a cywydd in praise of a specific location (Anglesey, the poet’s birthplace), and especially the two sophisticated and multi-layered elegies which Gruffudd dedicated to Dafydd ap Gwilym. Was Dafydd actually buried under a yew tree at Strata Florida, as Gruffudd claimed? This volume offers a new perspective on the claim. Other thorny question are raised: it is argued that the nature and significance of the bardic contest between the two poets should be fundamentally reappraised. There are praise poems here, alongside religious verse and love poetry, and a series of enigmatic englynion regarding a court case in Carmarthenshire.

Be the first to review “Gwaith Gruffudd Gryg” Cancel reply 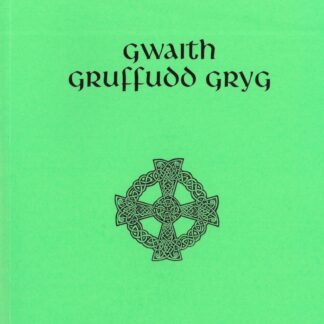