Ieuan Gethin was a gentleman-poet from Baglan near Swansea ( fl 1405–61), who took part in the Owain Glyndŵr rising in Glamorgan in the first decade of the fifteenth century. Only ten of his poems have survived, but their subject matter varies greatly and his fare is quite different to that usually provided by his professional contemporaries. We have here several humorous narrative poems where he portrays himself as an old man to whom unfortunate events occur: thieves stealing his wild bees’ nests, a fox taking the goose which he had fattened for Christmas, and his painful experience of catching a venereal disease following an encounter with a beautiful young woman. Also in the collection are two significant poems to Owain Tudur of Penmynydd, Anglesey (the grandfather of Henry VII) and two poignant poems composed when his daughter and son, Siôn, died of the plague. The very personal response to loss expressed in these poems makes it all the easier to empathize with his grief; both poems are free from the usual constraints of the more formal elegies of the period.

Be the first to review “Gwaith Ieuan Gethin” Cancel reply 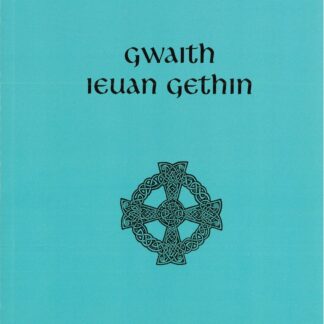