This volume offers a collection of the poetry of the fourteenth century in several genres. Madog Benfras was a friend of Dafydd ap Gwilym and, like him, a skilled love poet. The seven poems attached to his name attest to the vitality of love poetry in this century, as also do Rhys ap Tudur’s spirited poem to May and Gronw Ddu’s address to the woodland bower. In complete contrast is the religious verse which is included here: two confession poems, a warning against sin and a long account of the six days of creation. The reader will also encounter a poet’s shattering lament for five of his children, killed by the Plague, and will receive an insight into the adventures of the wandering poets from one of their number, Iocyn Ddu ab Ithel Grach. Also included in the volume are praise-poems and elegies, including a eulogy for one of Owain Glyndŵr’s supporters which was very probably composed during the rebellion. In the works of Yr Ustus Llwyd we have two of the most inventive (and malicious) satires in Welsh, and the prophetic poetry is represented by an anonymous poem which may belong to the time of Owain Lawgoch.

Be the first to review “Gwaith Madog Benfras” Cancel reply 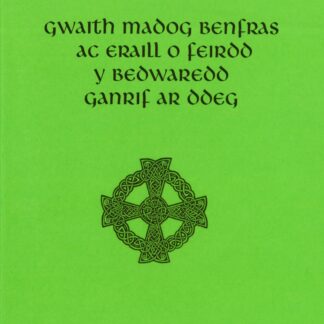