This volume contains the work of some of the fourteenth-century satirical poets whose poems are preserved in the Red Book of Hergest. It includes the four surviving poems of Prydydd Breuan, a skilful poet who probably hailed from Dyffryn Breuan in north Pembrokeshire. The first of these is a traditional praise poem in the awdl metre to Maredudd of Ynys Derllys, but the other three poems are of a very different nature: a satirical ode to a man called Tarre, who was possibly a harpist; a cruel and personal satirical ode to Siwan Morgan of Cardigan, in which the poet appears to be retaliating upon her for cheating him; and lastly, a satirical englyn addressed to a red-haired harpist known as ‘Coch y Delyn’. One poem by Rhys ap Dafydd ab Einion and one by Hywel Ystorm have survived, the first being a series of englynion mocking a thief by the name of Saul, and the second a long satirical ode mocking the poor craftsmanship of Adam the Goldsmith, also a boastful bard. The remaining five poems in this volume are anonymous poems to unknown characters. However, the first two contain references to north-east Wales and Anglesey, the third to Glamorgan and the last to the district of Llandybïe in Carmarthenshire. With regard to their style, coarse vocabulary, vulgar imagery and insolent exaggeration these poems are similar to the other satirical poems in the volume, and characteristic of the remarkable body of satirical poems preserved in the Red Book of Hergest. Elements of fun and banter are more apparent in the two final poems, which suggests that they possibly belonged to the tradition of the ‘cyff clêr’ (butt of the bards). 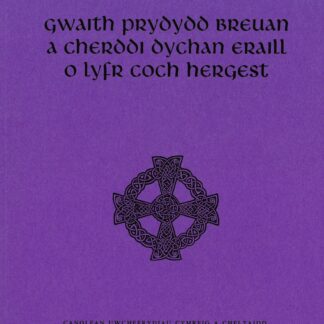