This volume is a critical edition of the work of three 15th-century priest-poets of the diocese of St David’s: ‘Sir’ Phylib Emlyn, ‘Sir’ Lewys Meudwy and ‘Master’ Harri ap Hywel, who may be considered among that important class of amateur poets whose cultural interests led them to study Welsh literature and the poetic craft. ‘Sir’ Phylib Emlyn sang poems to patrons such as the Vaughans of Tretŵr and Rhys ap Dafydd of Blaen Tren, Llanybydder. Phylib may also have composed the striking poem in praise of his purse, notable for its satirical edge and wit. Two poems by Lewys Meudwy, who engaged in bardic controversy with Phylib, have been preserved, as have four by ‘Master’ Harri ap Hywel, archdeacon of Carmarthen and an important cleric in his time. Harri ap Hywel appears to have been related to an older poet, Ieuan Tew Brydydd of Cydweli, and there are poems of debate between the two on the themes of love and due payment of the Tithe. While the literary skills of these poets may not always have been the match of their enthusiasm, their work reflects key aspects of the bardic tradition, by turns witty and profound. In them we gain a glimpse into the social and cultural lives of a group of men whose interests contributed much to the Welsh literature of the age. 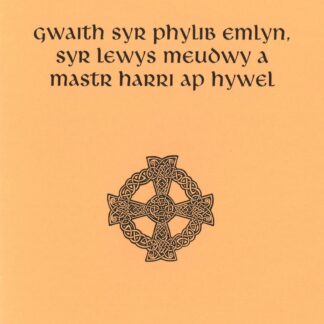